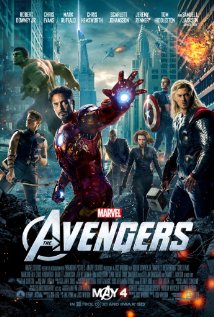 
Starring: Robert Downey Jr., Chris Evans, Mark Ruffalo, Scarlett Johansson, Chris Hemsworth, Jeremy Renner, Tom Hiddleston, Clark Gregg, Samuel L. Jackson, and Stellan Skarsgard.
Director: Joss Whedon
The much awaited super-hero extravaganza has finally arrived. Back in 2008, Iron Man producers announced that this would be the first of several movies based on the well-known Marvel comic characters and would culminate with the release of The Avengers in 2012. I remember thinking that was such a long way off. And it was. But this movie was worth the wait.
Loki (Tom Hiddleston) has returned thanks to a little intervention from an alien race known as the Chitauri and made possible by S.H.I.E.L.D.’s decision to recover the Tesseract; a device created during WWII that went down to the bottom of the ocean with Captain America. With the Tesseract Loki will be able to open a portal that will permit a Chitauri army to invade Earth.
However, Loki cannot do this alone. He uses his magic to subjugate Hawkeye (Jeremy Renner), Professor Selvig (Stellan Skarsgard), and a couple of S.H.I.E.L.D. agents to help him. Professor Selvig goes to figuring out the technology that will be needed to open the portal for the Chitauri army, Hawkeye recruits a team of enemy agents that have a beef with Nick Fury (Samuel L. Jackson), and Loki works on dividing the super-heroes apart before they have a chance to become The Avengers.
The rest I leave for you to find out on your own.


This is a well-made movie. The acting is top notch with stellar performances from Robert Jr. (Iron Man), Tom Hiddleston, and Mark Ruffalo (The Hulk). I suspected that Ruffalo had turned in an outstanding rendition of Dr. Banner when it was recently announced that he’d been signed to a multi-picture contract to play the Hulk/Dr. Banner. After seeing the movie I can tell you that it was a good move on the part of the producers. I also appreciated the role played by Clark Gregg (Agent Coulson) because it must be powerful enough to be a vital lynchpin of the plot while still remaining under the radar. Not an easy task if you ask me.
Special effects were excellent. There are a lot of explosions, breakable scenery, and hideous aliens flying spiffy anti-grav platforms. As much as I hate to admit that the flash and glitter that is special effects help to make the movie as spectacular as it is – they did.
My hat goes off to the story folk who put together a terrific tale of a bunch of ego-centric heroes who have to find a way to work with one another. They were also able to weave the stories of a large number of characters together without it becoming a confusing morass. The lines are funny at times and powerful when they need to be. I just can’t say enough good things about the craft that went into making this probably the best movie of the year.
The Avengers easily earned my highest rating. The only thing I have to add to that is – Why are you still sitting there? Go out and see this movie.