This uses a similar concept as the Hollywood Style prompt that I covered previously. The idea is to take a story and transport it to a new time and/or location. One of my Creative Writing teachers showed me this prompt and she used fairytales to generate ideas, but really it works for any sort of story; historic tales, news features, and novels.
Once you have picked a fairytale (or any story) and decided when and where to place it you then decide how the new setting affects how the story is told. And because of that it becomes a new story. For instance, what would happen if you took Hansel and Gretel and placed them in a wild-west frontier town? Hank and Gertie might be captured by a mystic Indian medicine-man, which changes the dynamics of the story immensely while still giving you a good starting place for the plot.
Something else you can do with this concept is change one or more of the characters in the story. What would happen if Little Red Riding Hood climbed up the beanstalk and had to contend with the Wicked Witch of the West? Moving away from fairytales, imagine Dennis the Menace taking a basket of goodies to his grandmother across town.
If you don’t write cutesy fairytales this method can still produce useable starter material. Take the story of Sleeping Beauty and turn it into a dystopian, science-fiction nightmare. Wouldn’t that be a kick?


I chose a classic novel, Frankenstein, for my example.


Monsters on the Midway – Based loosely on Frankenstein this novel chronicles the story of a college football coach who is obsessed with creating the perfect football team. He introduces a new method of training the players that takes them beyond their normal limits and transforms them into machines of flesh and bone. Unfortunately, this training affects their lives outside the football stadium. Seeing his mistake, the coach attempts to resign from the team, but the players have other ideas about that. The players begin a psychological terror campaign designed to keep the coach in place and continue with their inhuman training. 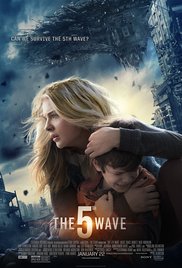 Apocalyptic stories are my favorite. I imagine I have seen more movies and read more books of this sort than most folks. That being said, the trailer for this film did not excite me. I thought it looked like pretty much any other movie in this genre. And I was right. It was entertaining, but not original.

This is how I rated The Fifth Wave.


1. Fun – The movie moved slower than what I expected from the trailer. There is less focus on burning buildings, crashing cars, and blind panic and more time spent on relationships. If I hadn’t been expecting the high-action content of most films in this genre I would have enjoyed it more. I gave The Fifth Wave a half MB.


2. Story – Take concepts from a dozen of the most popular apocalyptic movies that have been made and put them together as a single movie and you have The Fifth Wave. Scene after scene I was constantly reminded of other films. I found that virtually everything in the film has been done before in another movie. I gave The Fifth Wave a half MB for a good storyline borrowed from other sources.


3. Technical – The special effects were good, the sound track was good, the direction was good. A solid outing for all things technical in The Fifth Wave. I gave the film a full MB.


4. Acting – I don’t expect any Oscar nominations for acting, but I felt that most of the cast did a good job in their roles. Chloe Grace Moretz was solid in the lead role, but not exceptional. I found myself rooting for her all through the film. Evan Walker (Alex Roe) was my favorite character. I gave The Fifth Wave a full MB for acting.


By the numbers, The Fifth Wave gets 3 Movie Bucks. See it as a matinee and enjoy the slower-paced relationship film.


The news is a rich source of story material. Take a look through the news items in your paper, any online news source, television, or radio. Pick one of the news events and write a story based on the event having a much different cause than what was reported. In other words, give them a story that is a bit more fantastic than the truth.
Another interesting aspect of this prompt is that the genre of the story you are planning to write will affect how you interpret the news items. The unfortunate news of a commuter train derailing will generate a much different story for romance than it will for a mystery or an action/suspense novel.


The news item I used for my example involved the trading of political prisoners.


Based on that idea I generated the following elevator pitch.


Catch and Release – The President orders the military in Afghanistan to start secretly releasing dangerous prisoners in exchange for information from the terrorists about their rivals. On the surface this looks like a standard political move, but it is really a vicious program of annihilation. Each of the released prisoners has been infected with a virus that will spread death to the terrorist network and their families. The situation changes when several of the service men return home and die from the same engineered virus that they are supposed to be immune, except that this mutated strain no longer targets people that share with the carrier.