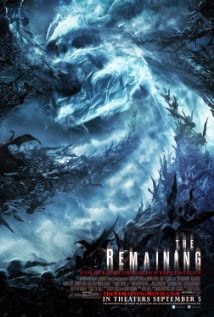 I happened to spot this film listed at the theaters and decided to check it out because it runs along a similar theme as The Gathering novel of mine. I wanted to see what the competition was doing. Watching it made me reconsider writing any more books about the Second Coming. If people have the same reaction to my books as I had to this movie, then I owe the world an apology.
Tommy (Johnny Pacar) is recording the events around his friends’ wedding when the events of the “Rapture” hit the Earth, leaving the unbelievers behind to face the horrifying events signifying the end of the world.
Hail, earthquakes, violent storms all make a very brief appearance in the film and seem to have minimal effect, considering their implied severity. Most of the film deals with attacks against the population by “The Fallen.”
This wasn’t so much a movie as a piece of propaganda designed to terrify the audience into immediately accepting God, in a specific manner of faith. Should you fail to fall into line with the correct methods of worship before the Rapture happens you will be torn to bits in a very painful way.


Here is how I rated the film:


1. Fun – Not fun. Two scenes caught my attention and I felt they could have led to some interesting possibilities. The first is when softball sized chunks of hail started slamming into the street. I thought that the film would deal with the prophesied disasters and that would have been entertaining. The second scene is when the great trumpets in heaven are blown announcing the breaking of another seal. Perhaps it was just the fact that the theater had the sound system turned up to a ludicrous volume, but it felt awesomely terrifying—in a good way.
Unfortunately, neither of those were more than mere moments. I found the rest of the film boring and tedious.
The Remaining gets Half a MB solely for the blasting horn that has given me plenty of pause to wonder if that is what the event would really sound like.


2. Story – The temptation for me is to judge this section of the movie on the potential for a great story that it didn’t deliver. However, that wouldn’t be fair. The story that they did provide was dull. Since they needed something to string together all the scenes of killing people off, they added a love triangle. Since everyone dies, who cares which of the two friends gets the girl?
The Remaining gets Half a MB for a predictable, unexciting storyline.


3. Technical – The special effects are decent and the trumpet in heaven bit was excellent. Technical also includes the direction of the film which I found to be totally lacking. On the positive side the film is quite spooky, so kudos to La Scala for getting that part of it right.
The Remaining gets Half a MB for its spooky feel.


4. Acting – The acting talent for The Remaining was decent enough. I had a connection with Italia Ricci and Bryan Dechart. John Pyper-Ferguson did alright with the material he was given, but I think better material would have allowed him to stand out in the story. All-in-all it wasn’t painful to watch any of the cast deliver their lines, but neither was I sitting on the edge of my seat to see what they would say next.
The Remaining gets Half a MB for acceptable acting.


The Remaining gets a rating of 2 Movie Bucks. I believe that the film has a limited appeal for those who adhere to the doctrine of the Rapture. Non-believers are unlikely to enjoy the film—in my opinion. If you are a believer I suggest checking it out at a matinee; you don’t want to miss that outrageous horn-blowing scene. If you are not a believer this should probably be a pass for you. 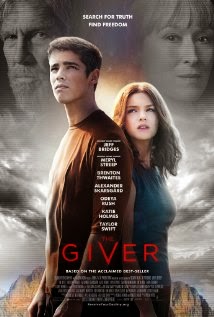 
This seems to be the year of the misleading movie trailers. In the case of The Giver, I suspect it has hurt the success of the film. Based on the trailers I expected a typical dystopian movie for the teen market, but boy was I wrong.
Jonas (Brenton Thwaites) lives in a perfect community. They have done away with war, violence, greed, envy, and emotion. Everyone gets up in the morning and takes their mandatory injection and then goes and does the job they have been assigned. Life is good.
That is, until Jonas is assigned to be the next Receiver of Memories.


The Giver is not a fast-paced action flick. Which is not to say the film was boring. Far from it. Be prepared for a thought-provoking, emotion-provoking tale about human nature that I think you will be mighty glad you watched.

Here is how I rated the The Giver:


1. Fun – I absolutely loved this film. Within the first five minutes I was hooked and sat in the audience mesmerized by the story.
The Giver gets a Full MB for fun.


2. Story – Of the four areas which I rate a movie The Giver rates highest in story. It is well-crafted and meaningful. Lots of great emotion and it makes you think. If I could give it a higher rating for this I would, but instead will let it raise the rest of the ratings.
The Giver gets a Full MB for story.


3. Technical – Excellent. Some beautiful . Some work with muted colors to enhance the storytelling. A nice futuristic set. All the work to make you feel somewhere else was nicely done. My hat is tipped to Phillip Noyce. I feel the directing of this film is largely responsible for the success of the story.
The Giver gets a Full MB for Technical.


4. Acting – Jeff Bridges, as the Giver, does a great job playing a man bearing the burden of a dark secret. Brenton Thwaites, Odeya Rush, and Cameron Monaghan are adequate as the friends entering the adult stage of their world. They neither impressed me with their acting skill, nor detracted from the movie. It is possible that I am unfairly discounting their efforts since I felt that the movie was a success. I really enjoyed the performance of Alexander Skarsgard as Father.
The Giver gets a Full MB for acting even though this is probably the weakest area of the film. Not bad, just not as stellar as everything else.


The Giver gets a rating of 4 Movie Bucks. I’m going to see it again and take my wife with me this next time. This is definitely one I am considering picking up for my home movie collection. I highly recommend film for adults. It may be too slow for younger audiences.