Here’s an extra post for the week. Normally, I reserve this sort of post for Wednesdays, but it has to be posted today and I have plans for part two of my report on LDStoryMakers12 for tomorrow.
To get on with the important stuff, the fabulous Susannah Leonard Hill has a contest over at her blog and I am super keen on winning a picture book manuscript critique from her. (Yep. Bet you didn’t know I’ve written a couple of picture books.)
Here is my entry. After you read it you could pop on over to Susannah’s blog and check out some of the other entries and see how I did in comparison. Without further ado, here is Monster Party. 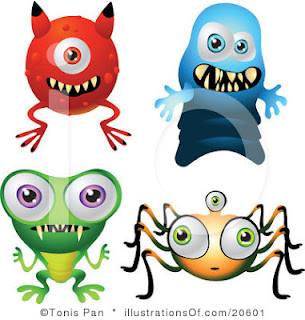 MONSTER PARTY
Nathan pulled his best friend Tori along as he raced home. Okay, not really racing as much as creeping along. With each plodding step he urged Tori to hurry. Everyone would be waiting for them.
When they arrived, Nathan left Tori at the doorstep and rushed inside. The living room was empty and the rest of the house was disappointingly quiet.
An eerie moan sounded from the hall closet. Maybe some of his friends were hiding in there ready to jump out and surprise him.
The joke would be on them. Nathan swung open the door and shouted “Boo.” Except that it came out as “B-b-b-b.” A mummy stood inside and reached for Nathan.
Tori took one look and fainted. Nathan backed away into the dining hall, where a scratchy noise came from under the table.
When he looked a huge spider with a dog’s head popped out from beneath and skittered along the top of the table.
Nathan turned to run and found his friends gathered in one corner of the dining room. The only movement they made was to shake and quiver. He had to save his friends. Nathan ran to a window and threw it open.
In flew a bat. It settled on the floor and turned into a vampire. Now the only way out of the room was through the kitchen. He braced for a sprint that would take him beyond the Trio of Horror when the door opened. His mother breezed into the room holding a cake. Candles flickered on top of the cake. “Happy birthday” shouted his mother and his friends. The Mummy, the vampire, and the wicked cool spider-dog shouted something that sounded like “Happy Birthday.”
“Mom.” Nathan clapped. “How did you know I wanted a monster birthday party?”
Posted by Randy at 8:13 AM