Last week I revealed a cover of Penumbra magazine that prominently showed off my name and the title of the story they had bought. By some strange coincidence the next Writing Prod on my list happened to be the same one I used to generate that story. (Really, I didn’t fudge the list at all.) That gives me a chance to flash the cover again as part of my article.
This prompt I call . . . Title Teasers. It is perhaps the easiest writing prompt in my bag of tricks – and it obviously works. Just look over some movie titles or song names and create a plot from what you think they could be about. Not Fragile was based on a song title by BTO. Other than the title the story shares no similarity to the song. 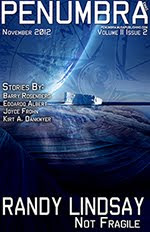 For my example this week, I’m going to pick another BTO title and hope I can generate a story that I can also sell to the Sci-Fi market. In order to give you a glimpse of what goes on inside my head (as scary as that might be) during this process, I’m going to list the titles that grabbed my attention:


Hold Back the Water


Down and Out Man


Thank You for the Feeling


I Don’t Have to Hide


Slave to the Rhythm


A Long Time for a Little While


All of these titles whisper ideas to me. Since I am looking to write some new short stories for submission maybe I’ll eventually use them all. For today I’ve decided to stick with just two. Although, A Long Time for a Little While screams at me for attention.

Thank You for the Feeling


Laura was on the cusp of discovering a method of controlling aberrant behavior by filtering out violent emotions. Until an accident in the laboratory turned her into a mental parasite feeding off the feelings of others. But the feasting brings out irresistible aggression and leaves the victim emotionally crippled for life. The worst of it is that with each feeding she loses a portion of her rational mind and slides ever closer to an unthinking beast that acts on pure, malevolent instinct.


Slave to the Rhythm


Plug into the groove and tune out the world. It sounded good to Brent who would much rather be anywhere other than work. When his employers not only allowed them to listen to music as they worked, but supplied the new headsets it seemed like the dawning of a new era. Clock in at 9:00, plug in the headphones at , and then next thing you knew it was time to go home. They even made overtime a piece of cake.
Until Brent wakes up at home and doesn’t remember clocking out. When he checks his voice-mail he finds five days worth of messages that includes a notice that he has been fired from his job. Then the police knock on his door and arrest him for the murder of his best friend.
But when the police plug-in for the drive to the precinct the situation changes. They remove his cuffs and draw their guns. Brent has seconds to act.


* Just a reminder to vote on which story idea you would like to see me turn into a Serial on this blog.
Posted by Randy at 11:31 AM