This week I have another piece of micro-fiction as part of the prompt over at Chasing Revery. By now you should know how this works. Carrie K Sorensen posts a picture on her website along with five words to use in the piece of fiction that is written. The picture is below and this weeks words are: System, Quarry, Ant, Bible, and Artillery. 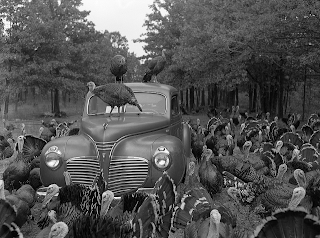 “All right,” shouted Big Tom, “let’s bring this meeting to order.”
“Meeting,” said Tom354, “I thought we were just hanging out, you know, talking turkey and such.”
“I thought this was the lunch line,” said Tom92.
“Well,” said Big Tom, “you’re both wrong. This here is the first meeting of the revolution and I need all of you to shut your traps so that I can talk.”
“Don’t you mean, cork our gobblers?” asked Tom719.
“Whatever,” said Big Tom. “The important point is that we begin plans to overthrow the system. We are declaring war on Thanksgiving.”
The crowd flapped their wings and gobbled with excitement.
“How are we going to do that?” asked Tom 560.
“By bringing out the heavy artillery,” said Big Tom. “We’ll show men what it feels like to be the quarry.”
“What’s artillery?” asked Tom560.
“This here thing I’m standing on is artillery,” said Big Tom.
“It looks like an old car to me,” said Tom719.
“Yeah, Big Tom,” said Tom413, “I’m pretty sure that’s a car.”
“Of course, it’s a car,” Big Tom stomped his claw on the hood. “I’m talking meteorologically here.”
“Oh,” said Tom22, “that explains it.”
Tom22 leaned over to Tom283 and said, “It don’t really explain his plan, but I didn’t want to upset him by saying so.”
Tom283 gobbled in agreement. And so did Tom37, Tom136, Tom340, and Tom568. From there the gobbles spread out like a wave of ants descending on a picnic.
“What are you planning on doing with a car?” asked Tom719.
“We’re going to drive it down to the courthouse and protest,” said Big Tom.
“Protest what?” asked Tom560.
“You bird-brain,” said Big Tom. “We’re going to protest them serving us up for dinner every Thanksgiving. Important people drive cars and when they see all of us inside this fine motoring machine they’ll have to rethink their holiday plans. Can’t you just picture us cruising down in this thing?”
“You really think that will work?” asked Tom500.
“I’d swear it on a stack of Bibles,” said Big Tom. “Everyone get inside.”
The entire farm exploded with excited gobbles. flapped in through the open windows of the rusted-out jalopy. When the interior wouldn’t hold any more they climbed on top, covering the roof, trunk, and hood.
Then when they were all settled Tom719 asked, “Who’s going to drive?”