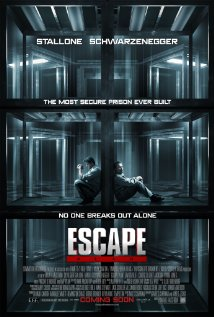 
My favorite part of going to the movies is watching the trailers for coming attractions. And sometimes what they show you in those previews is exactly what the movie delivers. I found that Escape Plan fell into that category. You have Arnold Schwarzenegger. You have Sylvester Stallone. You have a movie about people attempting to break out of the perfect prison. If you go to see this film that is exactly what you are going to get.
Ray Breslin (Sylvester Stallone) is an expert on prison security. He is a partner in a company that tests maximum security facilities by inserting him into the prison and allowing him the chance to escape. He is approached by operative Jessica Miller (Caitriona Balfe) with an offer to test an international detention center for high profile bad guys.
Once Breslin is inside he finds out that things are not run according to the normal rules. He is trapped and will need to find a way to escape this perfect prison or die there. Then along comes Emil Rottmyer (Arnold Schwarzenegger) who takes an unusual interest in Breslin. The two of them work together to escape before they are killed.


I enjoyed the movie. It has no chance of earning any Oscars, but then again that isn’t why we go see either of these iconic action heroes. They did what they do best and I felt that it was a reasonable effort overall. Escape Plan earned 2/12 Movie Bucks. This is how I rated it in each area.


1. Fun – Good. Problems with the plot provided small obstacles in fully enjoying the film, but overall I was pleased with the experience. I especially liked the character of (Jim Caviezel) and that more than anything else made me decide to give a full MB for fun.


2. Story – An escape expert inserted into the inescapable prison is not a new concept and it isn’t handled in a new way during this film. In fact, the massive holes in the plot really made me groan during the show. There is no emotional content for the characters; Stallone is the tough guy and Schwarzenegger is the likeable guy. Backstory and motivation seems to have been thrown in as an afterthought. I gave this area of the film production Zero MBs.


3. Technical – Most of the technical aspects of the film were good. The actual sets for the high-tech prison impressed me quite a bit, but there are a few directing gaffs that offset the highpoints. I give this aspect of the film half a MB.


4. Acting – Pretty good. Stallone, as the lead actor, was pretty wooden in his performance. Too much tough guy, not enough anything else. Normally, I would dock this aspect of the film half a MB for a substandard performance, but I felt that the effort put forth by the rest of the cast made up for it. Schwarzenegger was engaging. Faran Tahir, Amy Ryan, Sam Neil, 50 Cent, Vinnie Jones, and Vincent D’Onofrio all did well in their roles. However, Jim Caviezel really stood out in my mind. I thoroughly enjoyed his wicked warden role and give this aspect of the film a full MB because of it.


If you are in the mood for an action flick with two of the big names in that genre, then you should catch Escape Plan. Just ignore the gaping bullet holes in the plot and you should be fine. The final rating for the film is 2 ½ Movie Bucks.