Movie Review - Cloudy with a Chance of Meatballs 2 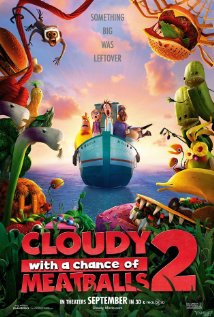 
The previews of this film had me at “Taco-dile Supreme.” Okay, I’m not saying that it was a difficult task to convince me to see this movie, because I really loved the first one. I just wanted to say, “taco-dile supreme.”
In the first movie, Flint Lockwood (Bill Hader) created a machine that turned water into food. That made quite a mess of their island home and everyone was asked to relocate while clean-up efforts were underway. For this means a job with his childhood idol – Chester V (William Forte).
Eventually, and his friends are sent back to the island to help Chester V’s people. When they arrive they find that ’s machine has started making living food, which they call—foodimals. They must weave their way through a food jungle filled with shrimpanzees and apple pythons in order to find the machine and turn it off.


I enjoyed the movie, but found that over the weekend I had a hard time remember what film I had gone to see. So it didn’t leave a very powerful impression on me. Cloudy with a Chance of Meatballs 2 earned 3 Movie Bucks. This is how it rated in each of the areas.


1. Fun – Excellent. I laughed a lot. Terry Crews did an excellent job as police officer Earl Devereaux (formerly voiced by Mr. T). The rest of the characters carried forth with the same comedy and antics that they used in the original film. It was very fun and earned a full MB in this area.


2. Story – Even though I liked the direction they went with the story, it felt like in an animated food venue. The characters failed to take on any new dimension in this film, with the possible exception of the revelation of Chester V as ’s childhood hero. I also felt that this script fell far short of developing an emotional connection with the characters. Overall, the story was extremely weak and it earned in this area.


3. Technical – The animation was great. It earned a full MB for the delivering one beautiful scene after another. Visually, a very effective film.


4. Acting – Excellent. All of the characters were funny and in family animation features like this that’s what counts. It earned a full MB, but please keep in mind that a rating like this indicates a lack of horrible acting and not and indication of Oscar winning performances.


I recommend seeing Cloudy with a Chance of Meatballs 2 as a matinee or even at a discount theater. The kids will enjoy it and you might too.