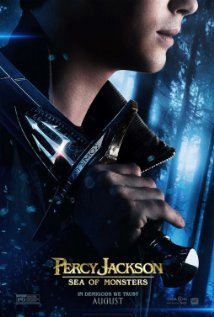 
This is the second in the series of stories by Rick Riordan about teen-aged children of the Greek gods. While I didn’t think it was quite as good as the first one I still enjoyed it a great deal.
Percy (Logan Lerman) is having a bad case of post-world-saving blues. He finds himself doubting his worth since he hasn’t done any major league heroics lately. Then a mechanical bull crashes through the protective barrier around and all of that changes.
The barrier exists as the result of the death of Zeus’s daughter. He transformed her into a tree that generates the protective field around and keeps all the half deity children safe. But someone has poisoned the tree and the only way to save her and the camp is to travel into the (The Bermuda Triangle) and retrieve the Golden Fleece.
Percy and his crew are not selected for the quest. Instead, Clarisse (Leven Rambin), the daughter of Ares is sent along with the satyr Tereus (Connor Dunn). Since Clarisse has been routinely routing Percy in the camp games it makes sense. However, Percy and his crew decide to take on the quest anyway after Luke makes an appearance and discusses “the prophecy.” A half-blood child of one of the big three is foretold to have a pivotal role in the fate of all the gods and their children. And Percy is the only half-blood that meets that criterion.
The plot for this film was good. It showed nice character development. The acting was not inspiring, but certainly did not detract from the story. I have to admit that I am spoiled when it comes to special effects. There was nothing wrong with the special effects in this movie, per se, but other than the scene with the mechanical bull they failed to impress me. My biggest complaint is with Annabeth (Alexandra Daddario). In the first film she had mad strategy skills and could handle herself pretty well in a fight. Unfortunately, in this film she just seems to be along for the ride. The character was totally underused in this story.
I had fun watching the movie and look forward to sitting down to watch it again with my children. Fun but unspectacular earns it a solid three Movie Bucks from me. Go see it as a matinee.