Movie reviews are an important part of my blog. That’s because movies have played an important role in my life. Not important like the wonderful effect my wife has on my daily life or like the deep imbedded love for God that I have. Movies have been important in as much as they constitute my favorite form of entertainment. They also inspire me to write and as such have guided my path in life to become an author.
Hopefully, that explains why a blog for an author in training posts so many movie reviews. At its center this blog is really about me and I love movies. Okay, not all movies just some of them.
A couple of weeks ago I watched two movies that I ended up giving the same rating, but for vastly different reasons. That caused me to rethink my movie rating system and make a few changes. Films will still be rated on a scale of 1 to 4 Movie Bucks, but the determination of that rating will be based on the following criteria.


1. Fun – how much fun did I have watching the movie? I will give one full MB if I had a blast. It gets half a MB if it kept my attention, but failed to thrill me. And a film will get zero MB if I couldn’t wait to get out of the theater.


2. Story – as a writer I can’t help but pay attention to the storyline. This category takes into consideration the innovative level of the concept, how well the plot was developed, and the quality of the dialogue. I will subtract half a MB for each of these areas that fall seriously short.


3. Technical – covers the quality of special effects, continuity of the story, style, and editing of the film which can lead to a choppy or hard to follow movie experience. Most of these are responsibility of the director. I will subtract half a MB for each of these areas that fall seriously short.


Now let’s put this new system to work. A while back I rented Warm Bodies and failed to post a review on the film. Here is my delayed review of that film. 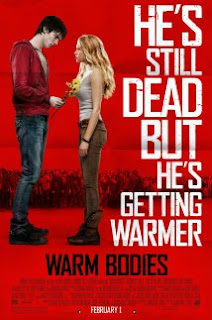 You knew it was going to happen—the zombie apocalypse. And it did.


R (Nicholas Hoult) is your typical run-of-the-mill, foot shuffling, brain eating zombie. He hangs out at the airport because it seems important to him. Like most of his memories, the reason he’s drawn to the airport have drained away along with his life force.
Then along comes Julie (Teresa Palmer). She awakens an emotion inside R and he hides her from the rest of the zombies. During the next few days Julie starts to realize that R is changing. He is becoming human once again. Okay, more human than the rest of the flesh-eating monsters.
With the help of R’s friend, M (Rob Corddry), they plan to return Julie home to the safety of the fortified walls of the human encampment.


I have to admit that even though zombie movies are not my thing the previews for this film caught my attention. It promised to be—different. And it was. The portions of the movie that are told from R’s point of view are hilarious. I found the thoughts and motivations of a zombie to be highly entertaining. I give it a full MB for fun based on the character of R alone.
Story gets a full MB as well. The concept is original and stands out from the army of droll undead films that are available everywhere. The plot was nicely developed, moving from a boy meets girl story to a look at society wide acceptance of something new and scary. And the dialogue, especially R’s, was very witty.
Technical gets a half MB. The special effects were on the cheesy side, but the continuity and editing were acceptable.
Finally, I gave the acting a half MB. Hoult and Palmer turned in reasonable performances in their roles, but neither stands out. The secondary cast, except for Rob Corddry and John Malkovich, were definitely B-Grade performances.
The total score for Warm Bodies was 3 Movie Bucks. If it were still in the theaters I would recommend catching it as a matinee or other discounted showing. However, since you can now find it at your local movie rental location I highly recommend checking it out.  Grab World War Z at the same time and you can have a zombie double feature with the two movies this year that really surprised me.