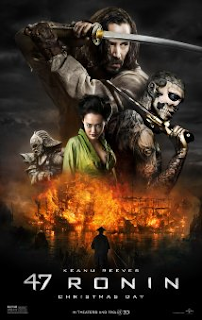 
This is an interesting take on a true story. My first experience with this event was with the film Chusingura. I found it to be an interesting tale, but the tragic ending kept it from being a favorite. In 47 Ronin Carl Rinsch has changed things up a bit by introducing a fantasy element to story. As far as I’m concerned it worked.
Lord Asano (Min Tanaka) is the respected Lord of Ako. His rival, Lord Kira (Tadanobu Asano), devises a plan where Lord Asano is bewitched into attacking him and is then forced to commit seppuku in order to regain his honor. The samurai that served Lord Asano are stripped of their honor, reducing them to masterless ronin, and banished. Led by Oishi (Hiroyuki Sanada), the ronin vowed to gain vengeance against Lord Kira for his treachery.


Kai (Keanu Reeves) is the centerpiece of the fantasy elements placed into the film. He is a half-breed outcast, with tremendous fighting skills, who has fallen in love with Lord Asano’s daughter, Mika (Ko Shibasaki). The twin issues of forbidden love and samurai envy plague Kai.


47 Ronin reminded me of the epic sagas of old, except set in . It gave a wonderful sense of the mythology of that country that I hadn’t previously experienced before. All-in-all, I thought it was really quite good.


1. Fun – This movie caught my attention and kept it. Dragons, witches, ghosts, and a mysterious race of warriors all added to the unique flavor of this film. It manages to pack quite a bit of gore-free action into the story. I give the movie a full MB for the fantasy retelling of an actual event.


2. Story – Working with a historic event can be challenging. Adding the Keanu Reeves character to the story allowed them to insert a few hopeful moments to this tragic tale. Weaving the fantasy elements into the story made it lighter and more interesting as well. That’s not to say that there aren’t a few flaws in the story, but because of their innovation in making these adaptations to the original tale I give it a full MB for storytelling.


3. Technical – This was a beautiful movie. The scenery and special effects made it a joy to watch. Creature special effects added to the wow factor of the film. I give it a full MB for the visual treats it presented.


4. Acting. Good. Keanu Reeves gives a standard performance. If you like Reeves then you’ll like his part in this film. And if not, well . . . the lead role is sort of split between him and Hiroyuki Sanada, who gave an excellent performance. The choice to bring in Japanese actors for most of the parts was spot on. I especially enjoyed the wickedly delightful witch (Rinko Kikuchi). Put that together and I give a full MB for acting.


47 Ronin gets 3 ½ Movie Bucks from me. This film, more than most, will benefit from seeing it on the big screen. Catch it as a matinee, which will make it easier to take the children. It probably isn’t appropriate for young children, but I had no problems with having my pre-teens watch it.