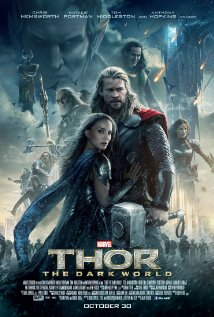 Before the nine realms existed there was darkness. Which was just how the dark elves liked it. Then came the light and a whole mythology of creatures that dwelt therein and the dark elves decided to wage war against them. With the Aether they planned to plunge the universe back into darkness, but the Asgardians stopped them.
As the nine realms align the conditions are ripe for another attempt at total darkness. Malekith (Christopher Eccleston), the leader of the dark elves, returns with the last of his race in order to finish the job. This time the Asgardians can offer little in the way of resistance and Thor makes the decision to take the weapon away from Asgard in order to eliminate the dark race once and for all—an act of treason.
Worse than that, he allies himself with Loki (Tom Hiddleston) to do it.


I found Thor: The Dark World very entertaining. That being said, it is in no danger of winning any Oscars. I gave it a rating of 3 Movie Bucks and feel that fans of the franchise will have a good time watching it.


1. Fun – I definitely had fun watching the fill. Based on my rating system, this was the film’s best category.  There’s action, comedy, quite a few bits of coolness, and a couple of touching moments. I especially liked when Thor obliterated the big rock creature at the beginning of the film. I give the move a full MB for non-stop entertainment.


2. Story – decent. The plot is not original, but I liked mythology surrounding the dark elves. I also enjoyed getting a better glimpse of the nine realms. The strange mix of archaic weapons and high technology was wondrously interesting. I gave this element of the film a half MB.


3. Technical – Very nice. Lots of cool other-world outfits, weapons, and vehicles used in a large number of scenes where things went !!! What’s to say—this was a visually effective film. I give it a full MB for extreme eye-appeal.


4. Acting – Good. I think Chris Hemsworth put in his best performance as Thor to date. Although, he still has some room to grow. For what little we see of him, Anthony Hopkins is tremendous. There wasn’t enough of Rene Russo. And then there is Tom Hiddleston. What can I say other than, Wow? This is a role that may stand out as one of the best fantasy/sci-fi antagonists of all time. I’m hoping they decide to make Loki: God of Mischief sometime soon. Overall, I give a half MB for acting.


Add that all together and you get 3 Movie Bucks for Thor: The Dark World. Perfect for a matinee outing with the family. You definitely want to see it at the cinema where it can be experienced in large-screen magnificence.