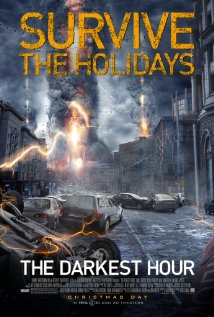 There seems to be a rule of three when it comes to movie releases. What I mean by that is in any given year there is likely to be a set of three movies with a similar theme. In 2011 that was the alien-invasion films. First on the scene, and one of the worst movies ever, was Skyline. Shortly after that, and what I had hoped Skyline would be like, we had Battle Los Angeles. There barely in time to be considered a 2011 release The Darkest Hour was released.
I enjoyed both Battle Los Angeles and The Darkest Hour. It would be tough picking my favorite between the two, because they each had a different feel. The first is basically a war movie and the second is much more suspenseful.
Of course, these are my kind of movies. Growing up, I read as much post-apocalypse fiction as I could find and the whole invasion of Earth concept has always been among my favorites. Keep that in mind when deciding for yourself if this is a movie you’ll want to see.

The Darkest Hour starts with Ben (Max Minghella) and Sean (Emile Hirsch) arriving in to sell the internet software they’ve developed to Russian investors. When the deal goes sour, they decide to go out and party Kremlin-style to assuage the pain of defeat.
They meet an American girl, Natalie (Olivia Thirlby), and her friend Anne (Rachael Taylor) and the two pairs of friends immediately hit it off. The festivities come to a grinding halt when golden lights descend from the sky and turn out to be aliens intent on killing anyone they find. For the most part, the aliens are invisible and invulnerable to firearms.
The four of them, and an unwanted party-crasher, find a hiding place during the confusion and survive the initial onslaught. But when food runs out they decide to venture outside once more.

This movie reminded me of Alien. Not in plot, but the overall feel. It’s a suspenseful sci-fi outing that has you wondering if the humans can do anything to stop the extra-terrestrial menace; containing lots of lurking and learning as they go.
What really worked for me were the aliens themselves. These are not ugly creatures with bigger and better guns than the humans, but a different sort of life form. That made it fun to find out, at the same time as the characters, about what they are really facing.
The film had more than a few surprises for me and a gratifying ending. Once again, keep in mind that this is really my sort of film.

The Darkest Hour earned a 3 ½ from me. They did a reasonable job with the suspense scenes. The acting was decent, especially considering there were no big names involved. I felt the dialogue could’ve been better, but found the overall plot engaging and was genuinely interested in finding out how it would all end.
This is definitely a film that you want to see big and loud in the theater. That being said, catching it as a matinee is more than a reasonable option. I have offered to go again with a friend of mine who hasn’t seen it, but I don’t think I would probably buy it on .