Movie Review - The Hobbit: The Battle of the Five Armies 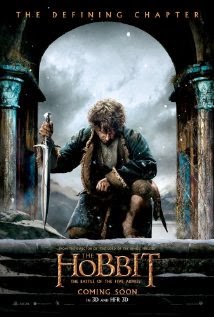 This is the final installment of The Hobbit series. Even though I thoroughly enjoyed the film I think it is the weakest of the three movies. That being said, I still think it is worth going to see.


The mighty dragon, Smaug (Benedict Cumberbatch) has been awakened and the citizens of Laketown will suffer. Smaug torches the entire town, but is miraculously killed by the human, Bard (Luke Evans). With winter setting in  and the dragon dead the humans seek shelter among the ruins of the dwarven city. And they are not the only ones interested in Thorin’s (Richard Armitage) legacy. The elves have arrived, wanting the return of priceless elvish jewelry that are among the vast wealth of the dwarven coffers. On top of all of that drama, an immense army of orcs are on the way. Da-da-daaaaa.
For those of you who were counting, that’s only four armies. You want to know who else shows up for this bloody party, see the movie.

Here is how I ranked the The Hobbit: The Battle of the Five Armies:


1. Fun – As surprising as it sounds I’m only giving a Half a MB for fun. Don’t get me wrong, the movie was fun and held my attention, but it is too focused on action and doesn’t have enough of the other elements which make for a good story. What can you expect? This is an entire movie about the battle that happens at the end of The Hobbit. I don’t feel that it was intended to be an entire nearly 3-hour movie.
The Hobbit: The Battle of the Five Armies gets Half a MB for fun.


2. Story – Here comes surprise number two, following on the heels of my comments about the movie being an extended action scene I am going to applaud the writers for putting in as many non-combat elements as they did. I enjoyed the interspecies romance between Kili (Aidan Turner) and  Tauriel (Evangeline Lilly).  The golden curse storyline with Thorin (Richard Armitage) is excellent. And adding Bard’s (Luke Evans) struggle to save the people of Laketown gives some of that human element every film needs to succeed.
The Hobbit: The Battle of the Five Armies gets a Full MB for story.


3. Technical – As with all of Peter Jackson’s films the visual effects are as beautiful as they are stunning. Fantasy creatures, picturesque landscapes, and the impressive innards of the dwarven halls under the mountain.
The Hobbit: The Battle of the Five Armies gets a Full MB for Technical.


4. Acting – Outstanding on all fronts. I can’t think of anyone who turned in a lackluster performance.
The Hobbit: The Battle of the Five Armies  gets a Full MB for acting.

The Hobbit: The Battle of the Five Armies gets a rating of 3 ½  Movie Bucks. This is one of those films that really need to be seen at the theater. A large screen and state-of-the-art sound system will enhance you movie-going experience for this movie. I suggest a matinee, but paying full price would be alright too.