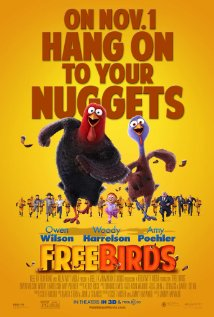 
Thanksgiving is my favorite day of the year. It beats out Halloween, it beats out my birthday, and it even beats out Christmas as far as I’m concerned. So it bothers me that there aren’t more movies and television specials that focus on all the turkeylicous wonder that is the holiday. As you can guess, my hopes for this movie were high.
Reggie (Owen Wilson) is not your usual turkey—he’s smart. Call it luck, fate, or clever plotting on part of the writers, but Reg ends up getting a Presidential Pardon and is taken to to live the dream of intelligent turkeys. His new life consists of watching Mexican soap operas and ordering pizza by the truckload. Until, Jake (Woody Harrelson) turkeynaps him.
Jake has a plan to sneak into a secret government facility, highjack a time machine, and travel back to the first Thanksgiving to save countless gobblers from their deaths at the hands of future holiday feasters.


Free Birds is good family entertainment. However, it failed to hit the mark as an instant holiday classic. I had hoped this film would be the Thanksgiving version of A Christmas Story, but some uninspired writing and directing have dashed that dream on the jagged rocks of disappointment. On the positive side of that news, that leaves an opening for me to create the first definitive Thanksgiving movie. Free Birds earned 3 Movie Bucks and this is how it rated in each of the areas.


1. Fun – Good. The funny parts in the trailers were not the only entertaining bits in the film. The turkey characters were likable and fun to watch. I enjoyed the romance between Reggie and Jenny (Amy Poehler) and the rivalry between Jake and Ranger (Jimmy Hayward). All of it added up to a full MB


2. Story – The basic concept of a pair of turkeys traveling back to the first Thanksgiving was good. Unfortunately, past that point the plot was mundane and predictable. It just felt that the writers were going through the motions of cranking out a funny family film. On the plus side, they created a funny script that was funny enough to earn a half MB.


3. Technical – The animation was good, although I don’t know why turkey chicks come in red, blue, and yellow varieties.  The problem I had with the film was with continuity, which is the responsibility of the director. I know this is meant to be light entertainment, but Myles Standish (Colm Meany)  character really bothered me. He is depicted with what looks like a match in his mouth—which weren’t invented until 1826). His clothing and the gun he wields have an 1800s style to them. This character was not so much a villainous pilgrim as a Wild West gunslinger.
The overall technical efforts earned a half MB.


4. Acting – Good. Owen Wilson puts in a wonderful voice performance for the main character. The rest of the cast did well. I particularly like George Takei as the voice of S.T.E.V.E. the time machine.


If you want some good clean Thanksgiving fun, I recommend seeing Free Birds as a matinee. The kids will love it and the adults should get enough laughs to make the trip worthwhile.