Once again, I am participating in the weekly writing prompt over at Chasing Revery. Hop on over there and check out the other mini-stories linked there. For anyone not familiar with this regularly scheduled prompt, the participants are asked to write something under 500 words, based on the picture below, and using 5 randomly chosen words. The words this week were: Dictionary, Sparrow, Cafe, Ladder, and Spinach. Hope you like what I came up with. 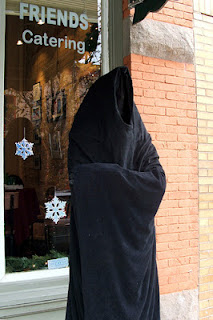 Death checked his wrist for the ump-teenth time, only to be disappointed once again when he remembered that he didn’t wear a watch. It was a ridiculous habit he’d picked up from the mortals. They were always so fixated with the minutes, hours, and days of their lives that they missed what was happening around them. He had crossed paths with Time on more than one occasion and found his fellow primal force to be a terrific bore. Until this moment, he had wondered why the mortals paid him homage with their constant watch watching.
Brunch, as it turned out, was vaguely between morning and . Having never been invited to the quirky meal before, he had had to check a dictionary to make sure he arrived at the café during the appropriate part of the day. Imagine that, someone had actually wanted to dine with Death.
Of course, this was no ordinary someone. It had been no less than Love herself who had asked to meet with him today. No matter who you were, she represented the very top rung of the social ladder. Time would be so jealous if he knew.
He glanced down the street in an attempt to spot her, but found only the mundane inhabitants of the world: humans, a pair of dogs being walked by a woman he was scheduled to collect this afternoon, and a mother sparrow feeding her chicks.
Looking at the birds as they participated in their own eating ritual made him wonder what he should order when Love and he were finally seated. Death walked over to the menu that had been attached to the window. Today’s special was Spinach Soufflé. That sounded very sophisticated.
From the position of the sun in the sky, he judged it to be nearly , possibly even later. What could be keeping her? He had a busy afternoon ahead of him. In fact, he was due to take his first Primal right after brunch.
With a sigh, Death returned to the spot where he had been waiting all morning and folded his arms. He hoped she arrived soon.
Posted by Randy at 1:01 PM