Time for another writing prompt over at The World of My Imagination. It used the picture below and the following five words: Devotion, Counterfeit, Miss, Smear, Heckle. Hope you enjoy what I came up with. 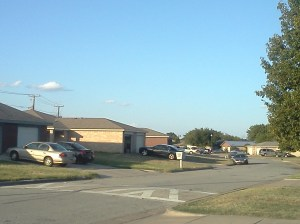 It didn’t look like a place of refuge with similar brown houses lining the street, connected by yellowish lawns, under a washed-out sky. I stopped for a moment to drink deeply of the scene before me. Compared to the superficial dreams, faux emotions, and counterfeit lives I had been involved with over the last year what lay before me looked beautiful.
Success is over-rated. Or at least what the world defines as success. Before I had left home I heckled my father for his silly devotion to family and principle. Obviously, I thought, he just wasn’t in touch with the real world. He barely had a high-school education and settled down with the girl that lived next door. What did he know about the big, bright world that beckoned to those talented enough to make their mark on it?
Oh, I made it alright! Straight to the top of the charts. Everyone loved me. My fans loved my image. My friends loved my money. How I miss having someone love me for myself.
If it hadn’t been for a tiff with one of my contemporaries I’d still be there. I’d still be going through the motions, playing to the crowd that always surrounded me, pretending I was happy. Instead, just a few words in the right ear were all it took to smear my name and end my career.
At first, I was furious. Then, I was desperate. Finally, I accepted the situation. I even called my ex-associate and told him it was alright; that I was happy it happened.
He laughed.
A short walk down the street and I’m standing in front of my parent’s home. It feels like my home, but I’m not sure what the folks will say when they see me coming back, not even a suitcase in my hands, with nothing to show for my great adventure except failure.
I knock on the door.
My father opens it, his eyes wrinkle as a smile spreads across his face. “I hoped that you were coming home.”
Posted by Randy at 2:01 PM